Polio, also known as poliomyelitis, is a debilitating and potentially deadly infectious disease caused by the poliovirus. The poliovirus can invade a person’s brain or spinal cord, causing paralysis in different parts of the body. Most people who are infected with polio — over two-thirds — will not show signs of symptoms. However, those who are symptomatic will often present with flu-like indications, including sore throat, nausea, fever, headache, and stomach pain. A smaller portion of those infected will go on to develop paresthesia (pins and needles feeling), meningitis, and even paralysis in the arms, legs, or both. Risk of death is severe when poliovirus infects and weakens the muscles that are required to breathe. The poliovirus is extremely contagious and often spreads through person-to-person contact, though it can be prevented with a vaccine.

There are two types of vaccines that prevent polio: inactivated poliovirus vaccine (IPV) and oral poliovirus vaccine (OPV). IPV, which consists of inactivated poliovirus strains, was pioneered by Jonas Salk in 1955. If a person who has received IPV is infected, antibodies will prevent the spread of the virus to the central nervous system. OPV, on the other hand, contains the attenuated form of the virus and can replicate effectively in the intestine to produce an immune response against the poliovirus. OPVs can be orally administered and do not require health professionals for dissemination purposes. IPV, in contrast, remains significantly more expensive than OPV and requires sterile facilities and equipment to administer, making it less useful in low-resource settings. OPV is the primary vaccine used in global efforts to eradication polio. As with most vaccines, if enough people in a community are immunized, the virus will lack susceptible hosts and will die out as a result. High vaccination levels are essential to stopping outbreaks, and the global health community is extremely close to eradicating the disease.

Polio remains endemic in only three countries: Afghanistan, Pakistan, and Nigeria, though wild poliovirus has not been detected in Nigeria since 2016. Eradication efforts focus on engaging at-risk communities with the involvement of health workers and community leaders. Thanks to these efforts globally, more than 18 million people are up and walking, who otherwise may have contracted the disease and suffered from paralysis. Moreover, the tools used to eradicate polio have been critical to strengthening health systems and bolstering disease surveillance technology worldwide.

There are many reasons for hope. Check out this blog from Rachel Smidt, the Communications Manager for Global Health at the UN Foundation, on the process of achieving a polio-free India – one of the greatest public health achievements of the 21st century! 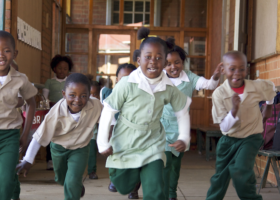